Getting started with Activiti and Spring Boot

This post is a guest post by Activiti co-founder and community member Joram Barrez (@jbarrez) who works for Alfresco. Thanks Joram! I’d like to see more of these community guest posts, so - as usual - don’t hesitate to ping me (@starbuxman) with ideas and contributions! -Josh

Activiti is an Apache-licensed business process management (BPM) engine. Such an engine has as core goal to take a process definition comprised of human tasks and service calls and execute those in a certain order, while exposing various API’s to start, manage and query data about process instances for that definition. Contrary to many of its competitors, Activiti is lightweight and integrates easily with any Java technology or project. All that, and it works at any scale - from just a few dozen to many thousands or even millions of process executions.

The source code of Activiti can be found on Github. The project was founded and is sponsored by Alfresco, but enjoys contributions from all across the globe and industries.

A process definition is typically visualized as a flow-chart-like diagram. In recent years, the BPMN 2.0 standard (an OMG standard, like UML) has become the de-facto ‘language’ of these diagrams. This standard defines how a certain shape on the diagram should be interpreted, both technically and business-wise and how it is stored, as a not-so-hipster XML file.. but luckily most of the tooling hides this for you. This is a standard, and you can use any number of compliant tools to design (and even run) your BPMN processes. That said, if you’re asking me, there is no better choice than Activiti!

Activiti and Spring play nicely together. The convention-over-configuration approach in Spring Boot works nicely with Activiti’s process engine is setup and use. Out of the box, you only need a database, as process executions can span anywhere from a few seconds to a couple of years. Obviously, as an intrinsic part of a process definition is calling and consuming data to and from various systems with all kinds of technologies. The simplicity of adding the needed dependencies and integrating various pieces of (boiler-plate) logic with Spring Boot really makes this child’s play.

Using Spring Boot and Activiti in a microservice approach also makes a lot of sense. Spring Boot makes it easy to get a production-ready service up and running in no time and - in a distributed microservice architecture - Activiti processes can glue together various microservices while also weaving in human workflow (tasks and forms) to achieve a certain goal.

The Spring Boot integration in Activiti was created by Spring expert Josh Long. Josh and I did a webinar a couple of months ago that should give you a good insight into the basics of the Activiti integration for Spring Boot. The Activiti user guide section on Spring Boot is also a great starting place to get more information.

The code for this example can be found in my Github repository.

The process we’ll implement here is a hiring process for a developer. It’s simplified of course (as it needs to fit on this web page), but you should get the core concepts. Here’s the diagram:

As said in the introduction, all shapes here have a very specific interpretation thanks to the BPMN 2.0 standard. But even without knowledge of BPMN, the process is pretty easy to understand:

This is the BPMN for this process

Let’s create a new Maven project, and add the dependencies needed to get Spring Boot, Activiti and a database. We’ll use an in memory database to keep things simple.

So only two dependencies is what is needed to create a very first Spring Boot + Activiti application:

You could already run this application, it won’t do anything functionally but behind the scenes it already

Let’s get something running. Drop the BPMN 2.0 process definition into the src/main/resources/processes folder. All processes placed here will automatically be deployed (ie. parsed and made to be executable) to the Activiti engine. Let’s keep things simple to start, and create a CommanLineRunner that will be executed when the app boots up:

So what’s happening here is that we create a map of all the variables needed to run the process and pass it when starting process. If you’d check the process definition you’ll see we reference those variables using ${variableName} in many places (such as the task description).

The first step of the process is an automatic step (see the little cogwheel icon), implemented using an expression that uses a Spring Bean: 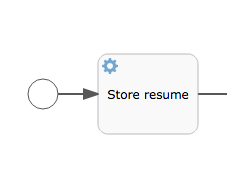 which is implemented with

Of course, we need that bean or the process would not start. So let’s create it:

When running the application now, you’ll see that the bean is called:

And that’s it! Congrats with running your first process instance using Activiti in Spring Boot!

Let’s spice things up a bit, and add following dependency to our pom.xml:

Having this on the classpath does a nifty thing: it takes the Activiti REST API (which is written in Spring MVC) and exposes this fully in your application. The REST API of Activiti is fully documented in the Activiti User Guide.

The REST API is secured by basic auth, and won’t have any users by default. Let’s add an admin user to the system as shown below (add this to the MyApp class). Don’t do this in a production system of course, there you’ll want to hook in the authentication to LDAP or something else.

Start the application. We can now start a process instance as we did in the CommandLineRunner, but now using REST:

Which returns us the json representation of the process instance:

I just want to stand still for a moment how cool this is. Just by adding one dependency, you’re getting the whole Activiti REST API embedded in your application!

Let’s make it even cooler, and add following dependency

This adds a Spring Boot actuator endpoint for Activiti. If we restart the application, and hit http://localhost:8080/activiti/, we get some basic stats about our processes. With some imagination that in a live system you’ve got many more process definitions deployed and executing, you can see how this is useful.

The same actuator is also registered as a JMX bean exposing similar information.

To finish our coding, let’s create a dedicated REST endpoint for our hire process, that could be consumed by for example a javascript web application (out of scope for this article). So most likely, we’ll have a form for the applicant to fill in the details we’ve been passing programmatically above. And while we’re at it, let’s store the applicant information as a JPA entity. In that case, the data won’t be stored in Activiti anymore, but in a separate table and referenced by Activiti when needed.

You probably guessed it by now, JPA support is enabled by adding a dependency:

and add the entity to the MyApp class:

We’ll also need a Repository for this Entity (put this in a separate file or also in MyApp). No need for any methods, the Repository magic from Spring will generate the methods we need for us.

And now we can create the dedicated REST endpoint:

Note we’re now using a slightly different process called ‘hireProcessWithJpa’, which has a few tweaks in it to cope with the fact the data is now in a JPA entity. So for example, we can’t use ${applicantName} anymore, but we now have to use ${applicant.name}.

Let’s restart the application and start a new process instance:

We can now go through our process. You could create a custom endpoints for this too, exposing different task queries with different forms … but I’ll leave this to your imagination and use the default Activiti REST end points to walk through the process.

Let’s see which task the process instance currently is at (you could pass in more detailed parameters here, for example the ‘processInstanceId’ for better filtering):

So, our process is now at the Telephone interview. In a realistic application, there would be a task list and a form that could be filled in to complete this task. Let’s complete this task (we have to set the telephoneInterviewOutcome variable as the exclusive gateway uses it to route the execution):

When we get the tasks again now, the process instance will have moved on to the two tasks in parallel in the subprocess (big rectangle):

We can now continue the rest of the process in a similar fashion, but I’ll leave that to you to play around with.

One of the strengths of using Activiti for creating business processes is that everything is simply Java. As a consequence, processes can be tested as regular Java code with unit tests. Spring Boot makes writing such test a breeze.

Here’s how the unit test for the “happy path” looks like (while omitting @Autowired fields and test e-mail server setup). The code also shows the use of the Activiti API’s for querying tasks for a given group and process instance.