One behalf of the Spring Boot team, and everyone that has contributed, I am pleased to announce that Spring Boot 1.3.0 has been released and is available now from repo.spring.io, Maven Central and Bintray. This release adds a significant number of new features and improvements and builds on the latest release of the Spring Framework. For full upgrade instructions and “new and noteworthy” features please see the release notes.

Here are some of the highlights of v1.3:

A new spring-boot-devtools module has been added which aims to improve the development-time experience. The module provides:

If you’ve got 10 minutes to spare, here’s a short introductory video.

In addition, simple Map based in-memory caching is also supported

The Maven and Gradle plugins can now generate fully executable archives for Linux/Unix that can be run by just typing:

Even better, they work as init.d or systemd services. To install as an init.d service just create a symlink:

Your banner.txt files can now include ANSI color codes. You can do crazy things like this: 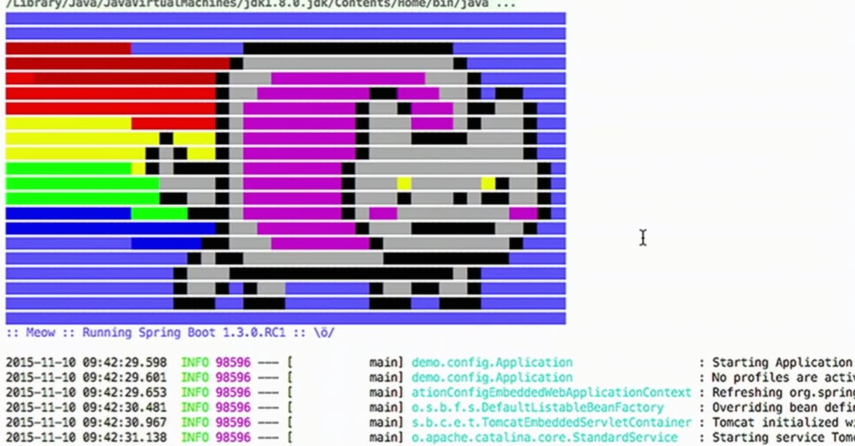 Out-of-the-box auto-configurations are now provided for:

Metrics support has been extended to support export and aggregation. In addition, Java 8 specific GaugeService and CounterService implementations are now provided (and used when possible) which offer improved performance.

We now include /logfile, /flyway and /liquibase actuator endpoints as well as support for Elasticsearch, Email and JMS health indicators.

There’s a whole host of other changes and improvements that are documented in the Release Notes. You can also find a list of deprecated classes and methods that we plan to remove in the next version.

Thanks so much to everyone that has supported Spring Boot. This release alone has seen 128 contributors join the effort. If you’re interested in helping out check out the “ideal for contribution” tag in the issue repository. If you have general questions, please ask at stackoverflow.com using the spring-boot tag.

Finally, if you’ve yet to see Spring Boot in action, you might want to check out this Devoxx talk by Stéphane Nicoll and Brian Clozel.