Welcome to my first blog post as a Spring Cloud team member :)

It’s been a month since I joined and it’s worth to share some of the interesting things that took place during that time.

If you’ve been reading any of my posts at my Too Much Coding blog then you know that I’m crazy about two things - testing and microservices. Since all that I do at the moment is microservice related today’s post will be about testing.

When I joined Spring Cloud team I did a quick scan of the Github and it turned out that we have quite a few projects to govern including:

All of them depend on Spring and Spring Boot. Of course each of them has its own version. That’s a lot of interchanging dependencies, isn’t it?

How to test dependencies?

I wanted to be sure that if someone changes something in Spring core or Spring Boot then we will immediately know that our libraries are still operational. Of course we could create a repetitive build on our CI tool but even though the integration tests would be passing - there is still a possibility of having issues with classpaths and JAR packaging.

Now whoever read this post of mine about Microservice Deployment would say that I’ve gone crazy cause I was completely against end to end tests in that particular scenario. So what has changed?

Why end to end tests were a good idea?

Binary approach - is it working or not?

With such a large number of projects, at this point in time I didn’t want to roam through all Github repositories, check their tests and reassure myself that everything is working fine. I wanted a black box solution that would tell me if the applications are working or not.

The created applications would be using many different projects of ours. The end to end tests would pick any breaking changes in those.

A couple of times I’ve checked the tests, did a ./gradlew bootRun and everything seemed to be working. Apart from the fact that java -jar ... didn’t work cause the packaging was broken. I wanted to test that too.

I wanted to create a couple of projects that would present the way Spring Cloud could be used. I wanted to step into a new Spring Cloud user’s shoes and have a place where I can quickly set up the whole world of applications, infrastructure and click around to see what are the reactions.

Since I’ve been giving a number of talks about microservices I already had sample code prepared (kudos to Szimano who is the co-author of the initial solution). I’ve tweaked it, bent it and hacked it and here came the Brewery.

The overall idea is that there are 3 applications that talk to each other:
- presenting service
- brewing service
- zuul service

The presenting service is a UI for the user where he can order ingredients for the beer to be brewed. It also has in its backend the statuses of brewing processes.

Here is the UI of the service: 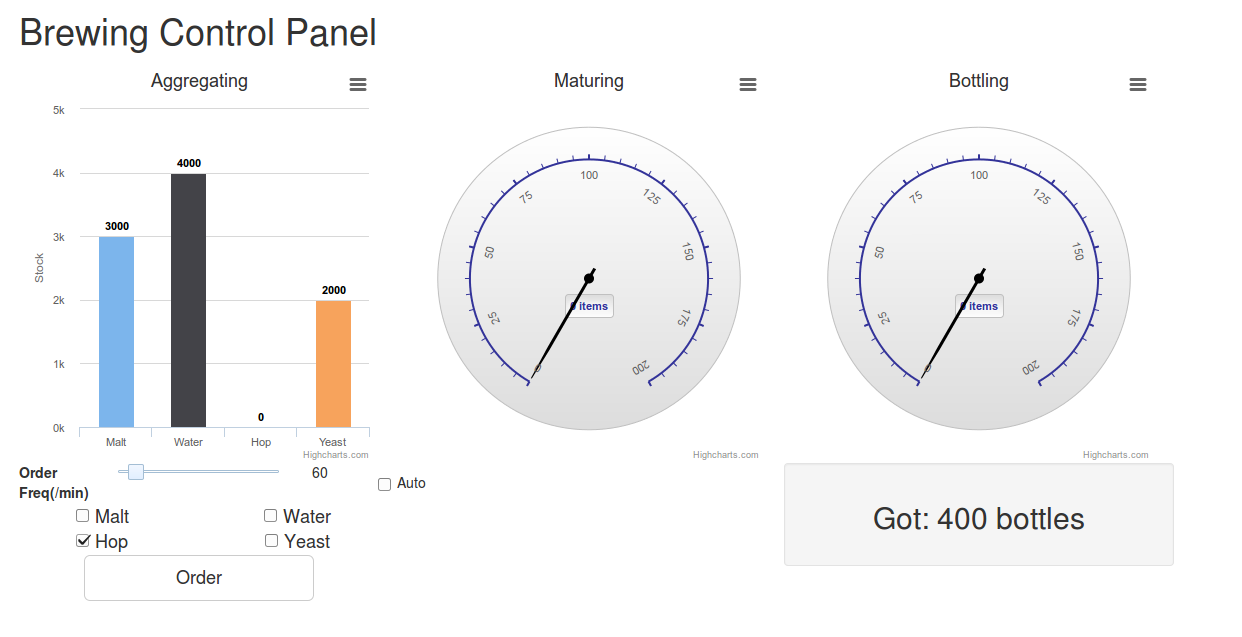 The brewing service is a big application that is responsible for multiple functionalities. Initially it was split into a couple of microservices but for simplicity’s sake we decided to drop the number of deployable units. Coming back to the functionalities, these are:
- collecting ingredients
- maturing the beer
- putting the beers into bottles
- reporting (listening to the events in the system and putting them to an in memory data store)

The zuul service is just a Zuul router.

The idea of this system is that all of the components are either using Service Discovery or Spring Cloud Stream to communicate between each other.

Check out the Readme for more information about the project structure.

What I wanted to achieve is re-usability. In order to test Spring Cloud Sleuth with Spring Cloud Zookeeper as Service Registry I didn’t want to change any code. Just wanted to run the tests with different parameters.

We’re using Spring Cloud abstractions to do that so if we change from Eureka to Consul then no code should change at all and the applications should still be able to communicate (it’s a matter of a JAR and configuration change). I wanted to test that too.

here are a bunch of conventions in the Brewery app. The main one is that you have a specific suffix to the docker-compose yml files that corresponds to the tested functionality.

Each of those docker-compose files knows how to run the whole world of applications and infrastructure to test the given functionality.

How to run the apps?

First you have to build the apps and their Dockerfiles with Gradle. Also you have to pass the WHAT_TO_TEST system parameter. Basing on that parameter the classpaths of applications are chosen. Example for SLEUTH.

Once that’s done it’s enough to run the aforementioned bash script to run the required applications:

NOTE : Sometimes the boot order matters so if you want to do things manually please check the corresponding bash file for the given functionality e.g. docker-compose-SLEUTH.sh.

In general it’s much better to boot the applications together with running the tests. How to do that? It’s just a one liner. Check out the next section for more information.

How to run the tests?

The easiest way is to:

Once you run the script, the brewery app will be cloned, built with proper lib versions and proper tests will be executed.

So if you want to run the tests just copy paste the code below:

If you have your dependencies downloaded all the building, downloading and running of tests should take up to 5 minutes.

If you have all the applications already setup you can run the acceptance tests manually. Check the next section for more information about this.

How do the tests look like and how to run them?

The acceptance tests are present under the acceptance-tests Gradle module of brewery. You can run them either

The tests are written in Groovy with Spock framework . If you have never heard of Spock it’s high time that you start using it in your project. Check out the Github code with an example of a Spock test used in the Brewery. 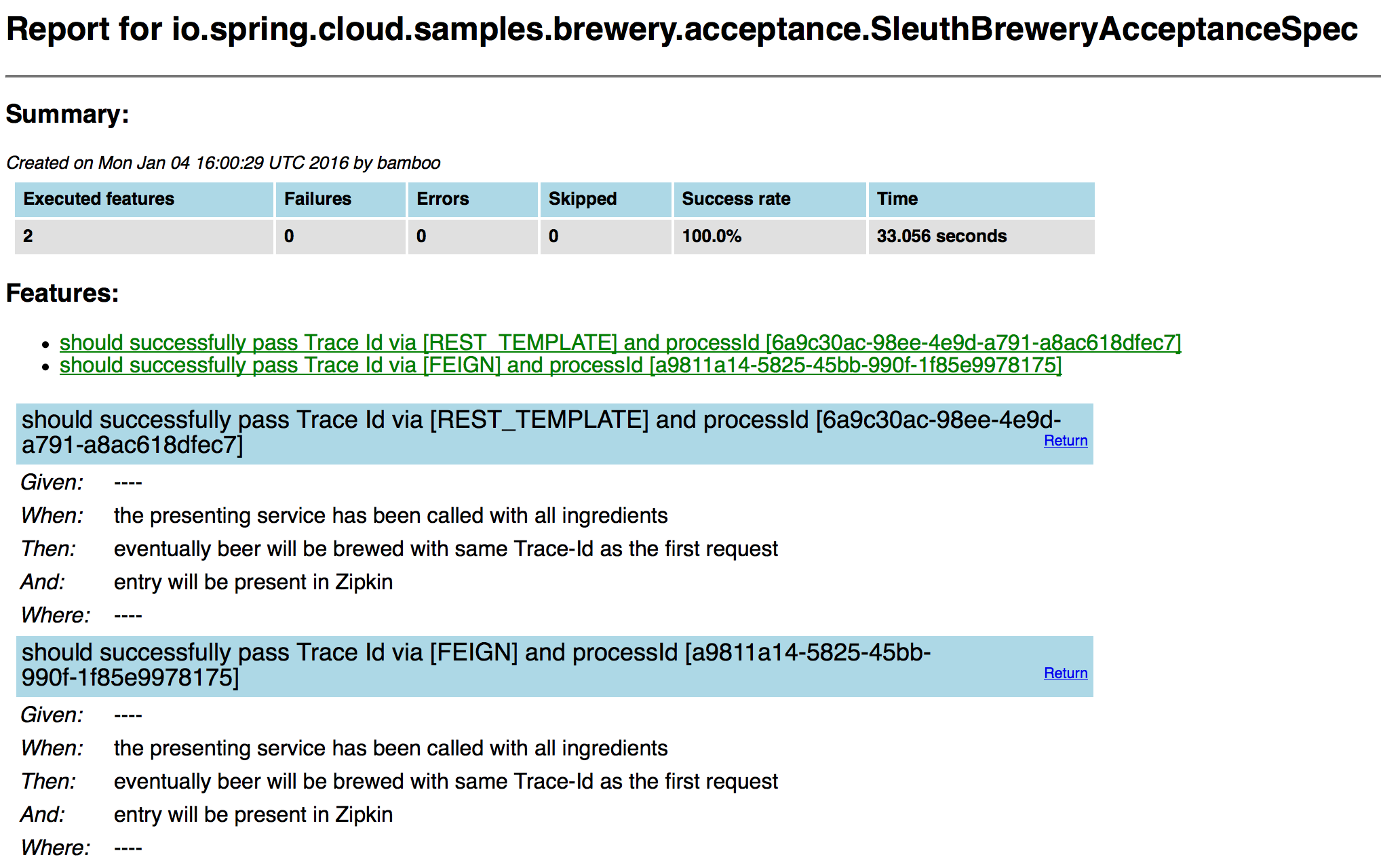 Are end to end tests a silver bullet?

It would seem that everything is awesome but actually it’s not. The end to end tests have their good sides but they also definitely have a lot of down sides. Those are:

The current setup suits our needs but in fact we want things to improve even further. That’s why we’re thinking about a couple of improvements to the current test approach.

Currently the end to end tests are executed together with the build on Travis. But…

The intent is to have faster feedback from our tests that are executed from the library’s codebase. Also we want our integration tests to be more reliable.

No more symbolic links (and far less of docker-compose) !

Also check out the Brewery project readme for any changes: https://github.com/spring-cloud-samples/brewery