The quickest way to generate Spring Boot projects is through start.spring.io. The site provides a curated list of dependencies that you can add to your application based on the selected Spring Boot version. You can also choose the language, build system and JVM version for the project. Over the years, the popularity of start.spring.io as the tool for generating Spring projects has grown exponentially and millions of projects are generated every year using the site.

For the past few months, we’ve been working on a complete overhaul of the project generation API. To better understand the motivation behind this, take a look at the project structure below: 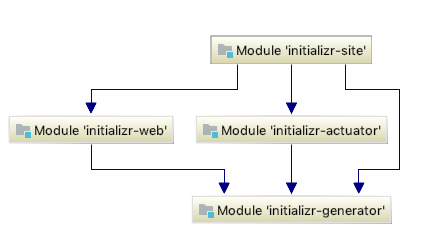 The problem with the existing API was that for anyone who wanted to customize project generation, the only sensible way to do that was to fork the library and extend or modify the ProjectGenerator class. This made for quite a clunky developer experience.

The main goal of the new API is to allow customizing the generated project without forking the library. To allow a contribution model for various aspects of the project, there is an abstraction for each of them. These include:

These abstractions are made available via several hook points that you can use to customize project assets:

The library provides several conditions so that customizers can be applied based on the requested project. The following example illustrates how the Gradle build can be tuned to apply the war plugin when a war packaging is requested:

The idea is that customizers can be defined in external modules (a bit similar to auto-configurations in Spring Boot) with no change to the library necessary.

As part of the refactoring, we’ve also refined the project structure.
﻿ 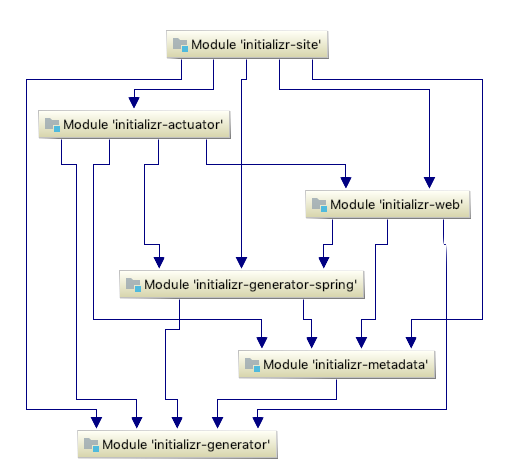 The top-level concepts such as ProjectContributor, BuildCustomizer are in initializr-generator. This module also contains the minimum infrastructure necessary to actually generate a project. initializr-generator-spring provides the contributors for the project structure that we would like to generate for Spring projects. Additionally, the code is now split into two repositories on GitHub, one for the library and the other for start-site that represents our production instance on start.spring.io.

The new project generation API has enabled us to easily add quite a few features to start.spring.io. We’ve merged them today so you can use those right away.

The generated project now contains a HELP.md file at the root of the project. The file is tailored according to the dependencies present in the application. Currently, it contains links to guides and reference docs related to the selected dependencies. In the future, we plan to customize the HELP.md file further to provide next steps that will help you grow your application.

If a project is generated with the restdocs dependency, the build is configured with the Asciidoctor plugin using a BuildCustomizer.

Auto-generation of directory structure for Flyway

For a generated project that uses Flyway, a src/main/resources/db/migration is now automatically created. To illustrate how easy this can be done with the API, here is the contributor for that feature:

We’ve barely scratched the surface of what is possible with the new API and we want to bring new features while still keeping a balance between an improved developer experience and non intrusive changes.

Typically, we want to bring more content to HELP.md where dedicated tips can be provided based on selected dependencies and, more importantly, dependencies you could have selected to bring awareness of what you might not know yet.

We are also working on a new Web UI for start.spring.io and ways to help you expand your applications, stay tuned!