On behalf of the Spring Batch team, I am pleased to announce the release of Spring Batch 4.2.0.RC1. We have been working on some performance improvements in the core framework, and this post highlights the major changes.

We have made some performance improvements, including:

We replaced this code with a SQL query that does the lookup at the database level, to return only the last step execution. The results are outstanding: Partitioning a step execution into 5000 partitions is almost 10x faster with this approach, according to our benchmark partitioned-step-benchmark:

In this release, we optimized the stop process by using a SQL query that does the filtering at the database level. Again, the results are impressive: With 100.000 job executions of a given job in the database, stopping the job is almost 40x faster with this approach, according to our benchmark stop-benchmark:

Faster Writes with the JpaItemWriter

Optimized Bean Mapping with the BeanWrapperFieldSetMapper

The BeanWrapperFieldSetMapper provides a nice feature that lets us use fuzzy matching of field names of a given JavaBean (Camel case, nested properties, and so on). However, when field names match column names, exact matching can be enabled by setting the distanceLimit parameter to 0.

In this release, we fixed a performance issue in the BeanWrapperFieldSetMapper that was introspecting field names by using reflection on each iteration, even when exact matching was requested (by setting distanceLimit=0). The result is that item mapping is now 1.5x faster than the previous version according to our JMH benchmark bean-mapping-benchmark: 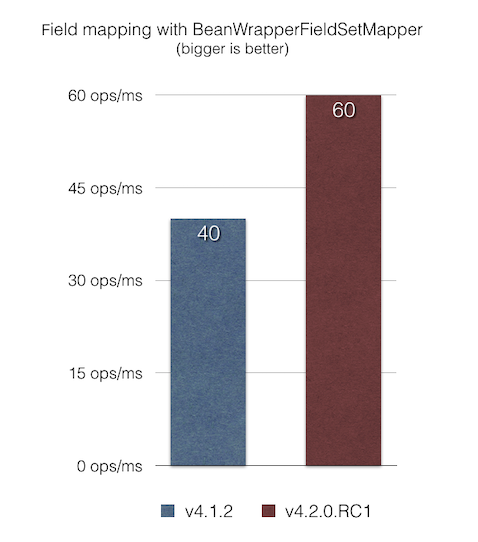 Please note that these numbers may vary in your case. We encourage you to try out Spring Batch 4.2.0.RC1 (which can be consumed with Spring Boot 2.2.0.M6) and share your feedback. Please refer to the change log of version 4.2.0.RC1 and 4.2.0.M3 for the complete list of changes.

Feel free to ping @michaelminella or @b_e_n_a_s on Twitter or to ask your question on StackOverflow or Gitter. If you find any issue, please open a ticket on Jira.

We plan to stabilize this new release candidate for the upcoming Spring Batch 4.2.0.RELEASE planned for September 30th, 2019. Stay tuned!