On behalf of the Spring Batch team, I am pleased to announce that Spring Batch 4.3.0-M1 is now available from our milestone repository.

This release is packed with new features, performance improvements, and bug fixes, as well as documentation and dependency updates! You can find the complete list of changes in the release notes, but here are the major highlights:

Up until now, it was possible to use named queries with the JpaPagingItemReader. However, this required the creation of a custom query provider, as follows:

In this release, we introduced a JpaNamedQueryProvider next to the JpaNativeQueryProvider
to ease the configuration, which can now be written like this:

3. Simplify the configuration of Spring Batch tests with JUnit 5

Please note that this feature does not affect JUnit 4 users, it only concerns JUnit 5 based tests.

Along the same lines of performance improvements we introduced in version 4.2, we continued our work on improving several parts of the framework in this release as well.

1. Use bulk writes in RepositoryItemWriter

Up to version 4.2, it was required to specify the method name to use to save an item to the database. This method was then called in a for loop to save all items. In order to use CrudRepository#saveAll, it was required to extend RepositoryItemWriter and override write(List), which is not convenient.

In this release, we made the RepositoryItemWriter use CrudRepository#saveAll by default. This changes improves the performance of the writer by a factor of 2, according to our benchmark repository-item-writer-benchmark: 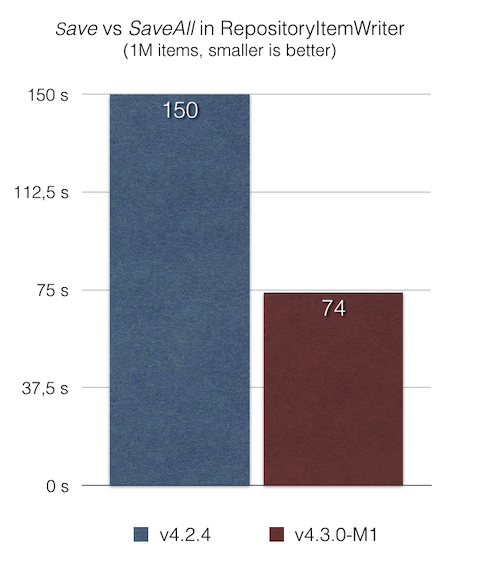 2. Use bulk writes in MongoItemWriter

Up until now, the MongoItemWriter used MongoOperations#save() in a for loop to save items to the database. In this release, we replaced this mechanism with a single call to BulkOperations. With this change, the MongotItemWriter is 25x faster than the previous version, according to our benchmark mongo-item-writer-benchmark: 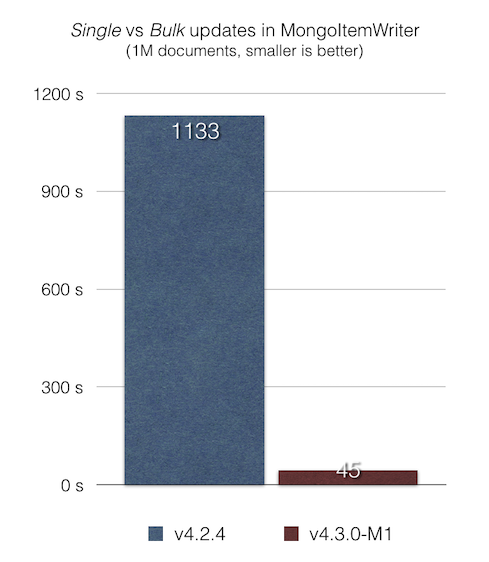 When starting a new job (or restarting a failed job), Spring Batch does a number of checks to validate a few conditions:

All of these checks involve a call to JobRepository.getStepExecutionCount to count the number of step executions. Up to v4.2, the implementation of this method was loading all job executions and step executions to do the count in-memory on the framework side. In this release, we have changed the implementation to do a single call to the database with a count query. This change improves memory usage as well as the method’s response time (by a factor of 6 according to our benchmark step-execution-count-benchmark), which, in turn, improves the overall start time of steps and jobs: 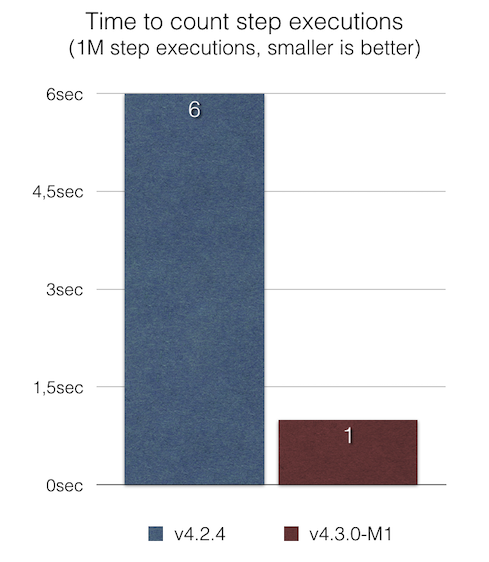 This release upgrades Spring projects dependencies to the following versions:

Spring Batch v4.3.0-M1 can be consumed with Spring Boot 2.4.0-M1, which is planned to be released next week. Stay tuned!

I would like to thank all contributors, especially Parikshit Dutta for his numerous contributions to this release! We look forward to your feedback on this milestone on Twitter, StackOverflow or Github.

All benchmarks have been performed on a Macbook Pro with 16Go RAM, 2.9 GHz Intel Core i7 CPU, MacOS Catalina 10.15.5, and Oracle JDK 1.8.0_201. You can find the source code of all benchmarks in the following links: