It is finally here! Spring Batch 5.0 is now generally available from Maven Central. Spring Batch 5 is the culmination of two years of work, including dozens of improvements, features, and bug fixes by more than 50 contributors! On Behalf of the team, I would like to thank ALL contributors who had a role in this huge release!

This blog post walks through the major highlights of this new generation of the framework. You can find the details of all the changes in the release notes and the upgrade instructions in the migration guide.

To continue the integration with supported versions of the third party libraries that Spring Batch uses, Spring Batch 5 is updating the dependencies across the board to the following versions:

This release also marks the migration to:

The effort towards providing support to compile Spring Batch applications as native executables using the GraalVM native-image compiler has started in v4.2 and was shipped as experimental in v4.3.

In this release, the native support has been improved significantly by providing the necessary Ahead-Of-Time processing and runtime hints to natively compile Spring Batch applications with GraalVM.

In this blog post, we want to share with you some of the benchmarks we have been working on in that area. The following benchmarks are based on the batch sample from the Spring Native samples project. These benchmarks show a comparison of the startup time and total execution time of the same batch application executed with a regular JVM and as a native executable: 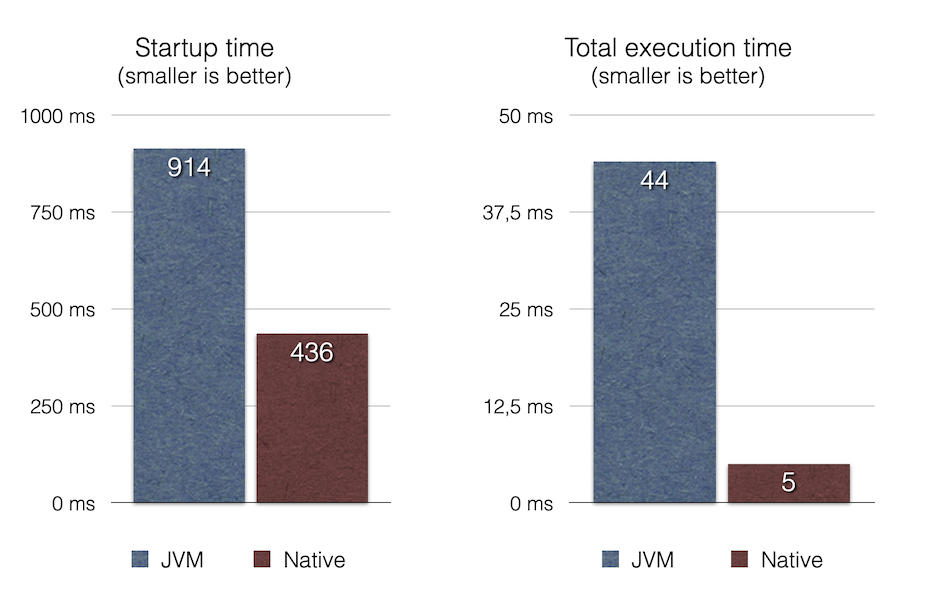 The values shown here are the average of 10 executions of the sample using the following software and hardware setup:

As these benchmarks show, a native Spring Batch application is two times faster at startup and almost ten times faster at runtime! This really is a game changer for cloud native batch workloads!

Introduction of the new Observation API from Micrometer

With the upgrade to Micrometer 1.10, you can now get Batch tracing in addition to Batch metrics. Spring Batch will create a span for each job and a span for each step within a job. This tracing meta-data can be collected and viewed on a dashboard like Zipkin for example.

While this seems a detail, it has a huge added value when debugging upgrade issues with regard to execution context serialization and deserialization.

In this release, the DefaultExecutionContextSerializer was updated to serialize/deserialize the context to/from Base64.

The SystemCommandTasklet has been revisited in this release and was changed as follows:

Add support to use any type as a job parameter

Up to version 4, Spring Batch supported only 4 types that can be used as job parameters, which are long, double, String and Date. While this was convenient to simplify job parameters handling on the framework’s side, it turns out to be constraining on the user’s side. For instance, what if one wants to use a boolean or a custom type as a job parameter? This required additional conversions to one of the supported types in Spring Batch, which quickly became inconvenient to users.

In this release, we have added support to use any type as a job parameter. The main change behind this improvement is the following:

The default notation of job parameters in v4 was specified as follows:

where parameterType is one of [string,long,double,date]. While this notation was concise, it showed several limitations as it does not play well with environment variables and is not friendly with Spring Boot.

In v5, we have changed the default notation as follows:

where parameterType is the fully qualified name of the type of the parameter. For example, the following key/value pair:

will be converted to an identifying job parameter of type java.time.LocalDate with the value 2022-12-12. Note how the identification flag is optional and defaults to true. This new default notation is well suited for the majority of use cases, but it might not be convenient when the value contains a comma for example. For this reason, we have introduced a new “extended” notation that is inspired by Spring Boot’s Json Application Properties and which is specified as follows:

We believe these two major changes of job parameters handling in Spring Batch are more convenient, more flexible and less prone to errors.

In this release, the @EnableBatchProcessing annotation introduced new attributes to specify which components and parameters should be used to configure the Batch infrastructure beans. For example, you can now specify which data source and transaction manager Spring Batch should configure in the job repository. The following snippet shows the new way to do such configuration:

In this example, batchDataSource and batchTransactionManager refer to beans in the application context that are used to configure the job repository and job explorer. You no longer need to define a custom BatchConfiguer, which was removed in this release. For example, providing a custom execution context serializer in Spring Batch v4 was possible by providing a custom BatchConfigurer, as follows:

In Spring Batch v5, you can provide a custom serializer as follows:

We believe this new way of configuring Spring Batch is more intuitive, more straightforward, and less prone to errors.

In this example, the JobRepository bean injected in the Job bean definition is defined in the DefaultBatchConfiguration class. You can specify custom parameters by overriding the corresponding getter. For example, the following example shows how to override the default character encoding used in the job repository and job explorer:

As of version 4, the EnableBatchProcessing annotation provided all the basic infrastructure beans that are required to launch Spring Batch jobs. However, it did not register a job operator bean, which is the main entry point to stop, restart and abandon job executions.

While these utilities are not used as often as launching jobs, adding a job operator automatically in the application context can be useful to avoid a manual configuration of such a bean by end users.

Up to version 4.3, the JobLauncherTestUtils used to autowire the job under test with the goal of facilitating the test setup. But what if multiple jobs are defined in the test context? And what if no Job beans are defined at all? So while this autowiring was convenient for most cases, it turned out to cause several issues in the aforementioned situations. In this release, and based on community feedback, we have decided to remove the autowiring of any job in JobLauncherTestUtils.

In this release, the entire test suite of Spring Batch was migrated to JUnit 5. While this does not impact end users directly, it helps the Batch team as well as community contributors to use the next generation of JUnit to write better tests.

The support for Java records as items in a chunk-oriented step was initially introduced in v4.3, but that support was limited, due to the fact that v4 has Java 8 as a baseline. In Java 8, records were not even in preview yet. That initial support was based on reflection tricks to create Java records and populate them with data, without having access to the java.lang.Record API, which was finalized in Java 16.

Now that v5 has Java 17 as a baseline, we have improved records support in Spring Batch by leveraging the java.lang.Record API in different parts of the framework. For example, the FlatFileItemReaderBuilder is now able to detect if the item type is a record or a regular class and configure the corresponding FieldSetMapper implementation accordingly (RecordFieldSetMapper for records and BeanWrapperFieldSetMapper for regular classes). The goal here is to make the configuration of the required FieldSetMapper type transparent to the user. The same feature has also been implemented in the FlatFileItemWriterBuilder, in order to configure either a RecordFieldExtractor or a BeanWrapperFieldExtractor based on the item type.

Several issues related to character encoding have been reported over the years in different areas of the framework, such as inconsistent default encoding between file-based item readers and writers, serialization/deserialization issues when dealing with multi-byte characters in the execution context, and others.

In the same spirit as JEP 400 and following the UTF-8 manifesto, we have changed the default encoding to UTF-8 in all areas of the framework and made this default configurable where appropriate.

We took the opportunity of this major release to improve the code base with features from Java 8+, for example:

This feature has been requested several times and is finally shipped in this release. It is now possible to use the newly added Maven BOM to import Spring Batch modules with a consistent version number.

Up until v4.3, Spring Batch provided support for MariaDB by considering it as MySQL. In this release, MariaDB is now treated as a separate database product with its own DDL script and DataFieldMaxValueIncrementer.

Support for SAP HANA as a job repository

SAP Hana is now officially supported as a job repository in Spring Batch.

SqlFire has been announced to be EOL as of November 1st, 2014. The support of SQLFire as a job repository was deprecated in version v4.3 and removed in version v5.0.

The code was moved to the spring-batch-extensions repository as a community-driven effort.

Due to a lack of adoption, the implementation of JSR-352 has been discontinued in this release.

Some bugs cannot be fixed without introducing breaking changes. We take the opportunity of this major release to fix such bugs. Please refer to the release notes for the complete list of 40+ bugs that were fixed in this release!

I would like to thank ALL contributors who had a role in this huge release! This release would not have been possible without the help of the amazing Spring community in general and the Spring Batch community in particular. We would be happy to hear your feedback on this major release and how it could improve your batch infrastructure. Please submit your feedback on Github, Twitter and StackOverflow.

As we have just released the first version of the next generation of Spring Batch, we still have a ton of ideas and features that we are working on or planning to work on for the next version, like:

We will share with you our complete roadmap in the near future and show you how you can participate in the early phases of development and testing of these new features. Stay tuned!