I received an email recently that asked about how to forward control from a wait-state in an Activiti (which is an open-source BPMN2 workflow engine from Alfresco) to a Spring Integration flow and then resume execution of the Activiti workflow process upon completion of some work in Spring Integration.

To really appreciate why this is useful goal, we need some background.

This last point merits some focus: a good BPM engine like Activiti supports visually modeling business processes. UML supports visually describing processes using activities (steps) and swimlanes (agents involved in satisfying those steps). UML, of course, is just a modeling tool. It has no runtime semantics. The holy grail of business process management has been to have a modeling notation that could be used by business analysts and application developers. BPMN 2 is as as close as we’ve come towards achieving that goal.

Here, for example, is a visual model of a very simple business process. 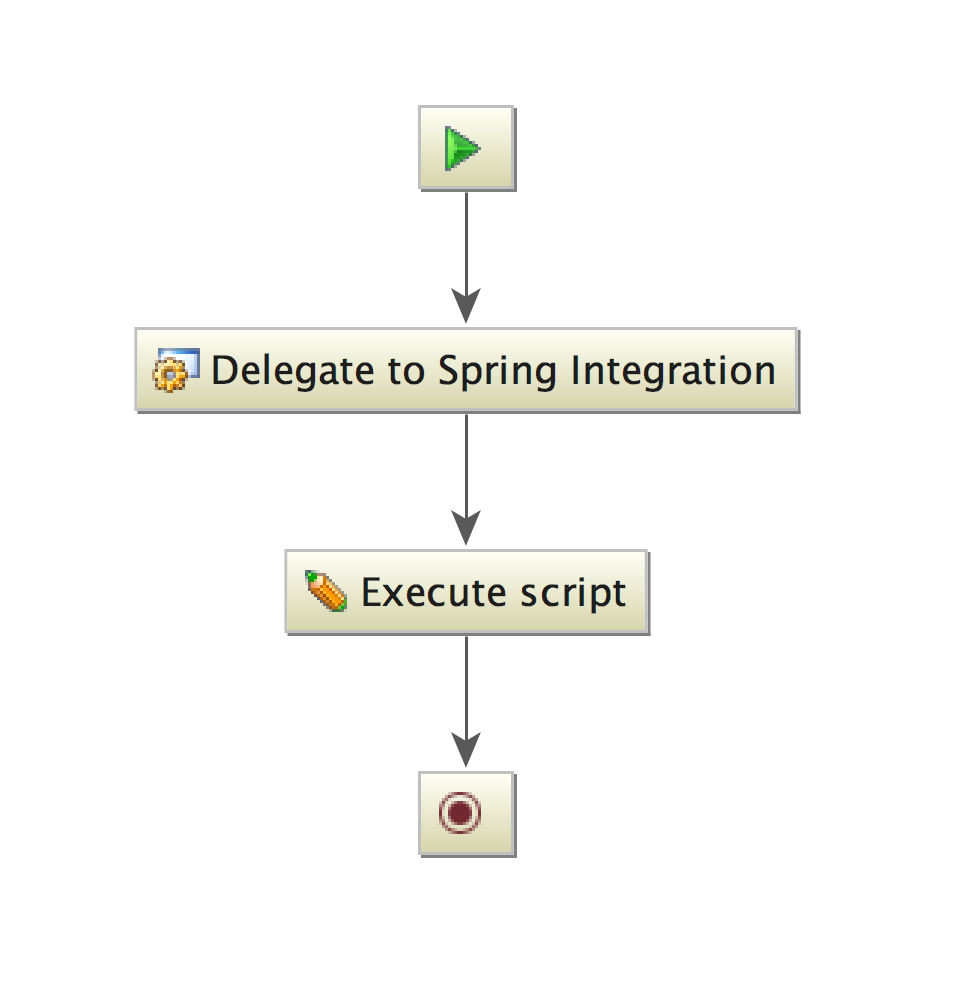 And here is the standard XML markup that’s been created to support that model. This XML has execution semantics, not just modeling semantics.

Most analysts won’t write this XML by hand. Instead, they’ll use a modeling tool like Alfresco’s Activiti Cloud. The XML artifact, however, is round-trippable: it may be annotated by developers and then revised in the modeling tool.

On inspection, though, you’ll see that most of this isn’t very complicated. The process has four states:

The ordering is explicitly spelled out by the various sequenceFlow elements which connect the nodes.

Activiti is a great way to keep track of business process state, but it’s not a particularly powerful component model or integration technology. For that we need an integration framework like Spring Integration..

What is Spring Integration

Spring Integration supports the integration of services and data across multiple otherwise incompatible systems. Conceptually, composing an integration flow is similar to composing a pipes-and-filters flow on a UNIX OS with stdin and stdout:

In the example, we take data from a source (the file input.txt), pipe it to the grep command to filter the results and keep only the lines that contain the token ERROR, and then pipe it to the wc utility which we to count how many lines there are. Finally, the final count is written to an output file, output.txt. These components - cat, grep, and wc - know nothing of each other. They were not designed with each other in mind. Instead, they know only how to read from stdin and write to stdout. This normalization of data makes it very easy to compose complex solutions from simple atoms. In the example, the act of cating a file turns data into data that any process aware of stdin can read. It adapts the inbound data into the normalized format, lines of strings. At the end, the redirect (>) operator turns the normalized data, lines of strings, into data on the file system. It adapts it. The pipe (|) character is used to signal that the output of one component should flow to the input of another.

Spring Integration inbound adapters adapt data from external systems (message queues like RabbitMQ, Apache Kafka, and JMS, email, Twitter, file system mounts, IoT-devices, and a zillion other systems) into Message<T>s. Spring Integration outbound adapters do the same, in reverse, taking Message<T>s and writing them to an external system (for example, as an e-mail, or a Tweet, or an Apache Kafka message).

Spring Integration supports event-driven architectures because it can help detect and then respond to events in the external world. For example, you can use Spring Integration to poll a filesystem every 10 seconds and publish a Message<T> whenever a new file appears. You can use Spring Integration to act as a listener to messages delivered to a Apache Kafka topic. The adapter handles responding to the external event and frees you from worrying too much about originating the message and lets you focus on handling the message once it arrives. It’s the integration equivalent of dependency injection!

Dependency injection leaves component code free of worries about resource initialization and acquisition and leaves it free to focus on writing code with those dependencies. Where did the javax.sql.DataSource field come from? Who cares! Spring wired it in, and it may have gotten it from a Mock in a test, from JNDI in a classic application server, or from a configured Spring Boot bean. Component code remains ignorant of those details. ~15 years ago, when we first started talking about dependency injection, we would talk about the “Hollywood principal:” “don’t call me, I’ll call you!” This applies even more to Spring Integration!

An Activiti and Spring Integration Gateway

Activiti can be used to describe a complex, long-running process in terms of recorded, auditable, and predictable states, and Spring Integration can be used to, well, integrate! Spring Integration is where we keep the interesting Java code, and Activiti keeps track of the overarching state. This trick was useful 20 years ago and it’s useful today in the massively distributed world of microservices, too, where processing for a single request may span multiple services and nodes. It’s convenient, then, that Spring Boot, Spring Integration and Activiti work so well together!

One common use case is to initiate a BPM process with Activiti and then, on entering a wait-state, delegate handling of that state to Spring Integration which can, of course, spread the work to other systems. Here’s a simple diagram illustrating the flow. 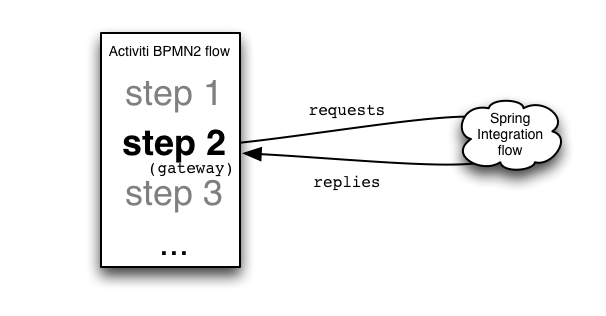 BPM process states can often involve human agents. For example, a workflow engine may have a state where a document is sent to a human for approval, but the reviewer is on vacation and won’t be back for weeks. It would be wasteful, not to mention dangerous, to keep a thread open with the expectation that whatever confirmation is needed to continue processing will come back within milliseconds or seconds.

Activiti is smart enough to pause execution, persist execution state to a database during a wait-state, and only resume upon having the process execution signaled. Signalling the process engine rehydrates the process and resumes execution. A simple example might be a new user enrollment business process that delegates to Spring Integration to send an email with a sign up confirmation link. It may take days for the user to click the confirmation link, but on clicking, the system should proceed with the enrollment business process.

In this post we’re going to look at how to initiate a BPM process that enters a wait-state and then delegates to Spring Integration to do some kind of custom processing and then, in the far flung future, resumes execution of the process.

We’ll need something to kick off our process, so here’s a simple REST endpoint (http://localhost:8080/start) that launches a new process each time:

Messages will flow across two MesssageChannels that we’ll create in a @Configuration class: requests and replies.

The nice thing about using a @Configuration class is that it is itself a Spring component and can be injected anywhere. We can dereference the channels by invoking the @Bean provider methods directly. The alternative is to use @Qualifier everytime we inject a reference to one of the channels, e.g.:

Our BPMN is pretty straightforward, but we’ll use an Activiti-specific namespace attribute, activiti:delegateExpression="#{gateway}", to tell Activiti to call a bean named gateway that’s registered in Spring. Activiti knows to do this because this application uses the Activiti auto-configuration for Spring Boot which, among many other things, exposes Spring-managed beans to the Activiti expression-language. The gateway is an Activiti-based bean of type ReceiveTaskActivityBehavior. Spring Boot has auto-configurations for both Spring Integration and Activiti so 90% of the tedious setup goes out the window.

Let’s look at our simple gateway component, an implementation of Activiti’s ActivityBehavior interface that acts as a callback where we can send a Message<T> into the requests channel and kick off our Spring Integration flow. The important thing here is that we’ve captured the executionId which we’ll need later to resume or signal the process.

The Message<T> will pop out the other side of the requests MessageChannel and something needs to process it. In a sophisticated example, it’d be trivial to transform the request into a meaningful message and then, for example, forward it to some other system like e-mail. Here, we just print out the headers so that we can note the executionId and use that later.

At this point, the workflow definition will have been persisted and there is no active process instance. We need to signal it, somehow, asynchronously. We’ll do so using a REST endpoint, http://localhost:8080/resume/{executionId}. REST is easy to grok, but really we could’ve used any event from any external system that Spring Integration knows about to achieve this effect. The only thing to ensure is that, whatever the external event, we’re somehow able to send the executionId along, as we do here by capturing it in the URI.

When the Message<T> flows through the replies MessageChannel, it’ll pop out the other end and, again, something needs to process it. Here, we’ll use another Spring Integration flow that takes the incoming Message<T> and signals the resumption of the process. Once this flow is executed, you’ll see the next step in the process, the scriptTask, evaluated and the words “Moving on!” printed to the console.

We’ve covered a lot! We’re involving both a BPM engine and an integration framework to handle processing, and I appreciate that the correct use of the intersection of the two is kind of a niche topic. The goal in this post was to effectively use both, where applicable, to the fullest. BPM adds a fair amount of cognitive load for simple integrations but offers a lot of value when business process descriptions must be model- and business analyst-friendly. One common misconception is that developers have to give up the ability to enhance the system once BPM is involved; NOT SO! Thanks to Spring Boot and some hard work from the Activiti team, Activiti works perfectly with all of Spring.

The code for the example is online.