On behalf of the team, I’m excited to announce the 1.0 GA release of Spring Cloud Data Flow!

Spring Cloud Data Flow (SCDF) is an orchestration service for data microservices on modern runtimes. SCDF lets you describe data pipelines that can either be composed of long lived streaming applications or short lived task applications and then deploys these to platform runtimes that you may already be using today, such as Cloud Foundry, Apache YARN, Apache Mesos, and Kubernetes. We provide a wide range of stream and task applications so you can get started right away to develop solutions for use-cases such as data ingestion, real-time analytics and data import/export.

Streams are defined using a DSL inspired by the Unix pipeline syntax. As an example, the DSL for a stream that performs data ingestion from an http endpoint and writes to an Apache Cassandra database is defined as http | cassandra. In turn each element of this DSL maps onto a Spring Boot microservice application focused on data processing that uses the Spring Cloud Stream programming model. This programming model lets you focus on handling the input and outputs of your applications while SCDF configures how those outputs and inputs map onto the messaging middleware, which is how applications communicate. Multiple message brokers are supported through a binder abstraction in Spring Cloud Stream. Currently RabbitMQ and Kafka are available for use in production. Consumer Groups and Data Partitioning are also supported in Spring Cloud Stream and can be configured when deploying a stream. 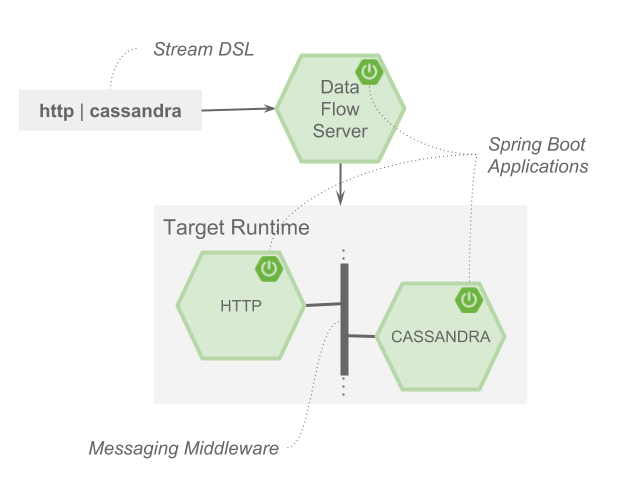 Today we are also announcing the release of

Support for Apache Mesos is under development. We are also quite happy to see community contributions for other runtimes, for example OpenShift. You can find out more about the architecture of SCDF in our reference manual.

Notable features in this release are:

Spring Cloud Data Flow has been under development for about one year, having evolved out of the previous project Spring XD which had a similar goal, to simplify the development of streaming and batch applications. We learned a great deal through that experience, which has been described quite nicely by Sabby Anandan in this blog post.

A major architectural change was replacing our own application runtime with a pluggable Deployer Service Provider Interface. While much of the engineering time spent in Spring Cloud Data Flow 1.0 GA was in making this architectural shift, we are now in a very good position to continue to add higher level value on top of this foundation and not have to spend time developing core runtime features. Here are some of the ideas on the team’s collective mind:

For the complete list of features, bug-fixes, and improvements, please refer to the closed 1.0 RELEASE GitHub issues.

We welcome feedback and contributions! If you have any questions, comments or suggestions, please let us know via GitHub Issues, StackOverflow, or using the #SpringCloudDataFlow hashtag on Twitter.